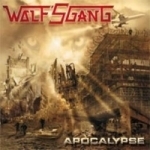 When a band plays with a lot of passion, they have won your attention for 50 percent, right? With the amount of passion these gentlemen present their debut "Apocalypse", it didn’t bother that much that the lyrics / vocals from Frédéric Bailly are in French. What I can read from the titles they deal about (the First World) War. And now we’re mentioning, the vocals are the weakest point about this record, although they suit the music quite well. With big drafts WOLF’S GANG draws from the classic Heavy / Power Metal tap. Surely one with a fine British flavour, if you get my point. Where these guys played in the past is a mystery to me and the only previous release known is their demo "Larmes Fatales" from 2008. Julien Amiot and Jeremy Thiebauld clean cut some typical but enjoyable riffs. Drummer Yohann Tanfin slams everything together professionally and with Hermann Goizet (bass) making it sound organic and controlled. WOLF’S GANG won’t win a price for originality, but again the passion makes this album enjoyable. These 10 tracks are mostly in a high pace except the slow ‘Mon Combat’. They’re supposed to give a good show and that’s where these tunes will probably suit best. Check this out if you want to capture the eighties spirit. Where better could this have been released than on the congenial Emanes Metal Records? For more info, check www.emanesmetalrecords.com, www.myspace.com/wolfsgang89 or http://wolfsgang.monsite-orange.fr.