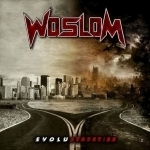 During the last years, there were lots of new Thrash Metal bands seeing to light of day. Most of them are irrelevant in my eyes, since they didn’t even come near to the class the old heroes of the 1980s have now or even had in their glory days. Just a few albums sounded at least fair, very few were good and distinct enough to be more than mere copycats. So I was quite surprised by the Thrash Metal these guys from São Paulo deliver. WOSLOM started in the last millennium and recorded five demos until they released their self financed debut "Time To Rise" in 2010. Another three years later, they are ready to unleash their second strike "Evolustruction". And this album has it all. I haven’t heard Thrash Metal that refreshing and elaborate at once for ages. Let’s call it: Thrash Metal de luxe, with wit and power, groove and passion. The opening title track ‘Evolustruction’ already caught my attention within seconds with its grooving intro riffing and finally convinced me with a harmonic bridge. After that, ‘Haunted By The Past’ starts off with a riff massacre that left no question at all. Even though ‘Pray To Kill’ and ‘River Of Souls’ are more than a bit of all right as well, they are a little bland in comparison to the next one. ‘No Last Chance’ is an absolute smash, bringing along extremely very cool harmonies and melodic chorus. This song is more a groover, with influences from IRON MAIDEN as well as old METALLICA. The subsequent ‘New Faith’ is equally great, a riff and break laden thrasher in the tradition of the later Bay Area sound. In ‘Breathless (Justice’s Fall)’ we even find some "Whoo-ho"-choruses, giving this slightly too long song a very subtle Punk touch. The last own song ‘Purgatory’ surprises again, this time with well used acoustic guitar breaks and more fine lead guitars. As a bonus we get a cover tune in the end. ‘Breakdown’ was originally recorded by the (to me) completely unknown Thrash band MAD DRAGZTER, also from São Paulo. Since I never heard the original version, I think this one is a fine up speed album closer. So musically WOSLOM definitely deliver lots of quality. And the singing fits perfectly, since the vocal tones remind of early, more melodic Chuck Billy before he tried to become a Death Metal singer, but with a own style as well, and a little exotic touch due to the (barely hearable) accent. Add a not too polished, yet clear production and you get my personal favorite surprise of the last months. In the glory days, the slogan "Thrash with class" was used for bands like SAVAGE GRACE. Now WOSLOM gave these words a new meaning. Thrashers go to www.woslom.net, where you can also get a free digital single of the title track plus three raw live versions of songs from their debut album, recorded in Europe. Or you check them out and like them at www.facebook.com/woslom