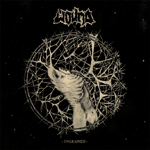 F.D.A. Records has been churning out some great Death Metal music for the last few years and also picking up some solid talent on their roster. One of the label’s standouts is Germany’s WOUND who have an old school sounding style of Death Metal. The band’s debut album, 2013’s "Inhale the Void", caught the ear of many and has been on my radar ever since. Now they are coming off of a 4 year lay off and bringing to the masses their sophomore effort titled "Engrained". The first question is: does this album sound anything like their debut? Well it is hard to say because there are 2 mindsets when you discuss this with others. People either think the their debut is a solid effort and then there is the other side of folks that didn’t like the debut. Therefore to answer the initial question will really depend on one’s opinion about the debut. Personally I liked their debut, it was full of catchy riffs and headbanging pandemonium. Songs like ‘Morbid Paradigm’ and ‘Carrion’ really show that this album picks up where the debut left off. The production on this album is almost as good as their debut but I noticed that the vocals were turned down lower than the rest of the music especially in certain songs. Not by much but still enough to have the instruments wash out some of the vocals. ‘The Plague’ is a perfect example where part of the vocals get drowned out by the rest of the music, but the song itself is a badass song as it has a very thrashy beat. The band takes things into a more melodic route on their final track ‘Engrained I, II & III’ and is a great jam to end the album on as it provides a quick musical summary of the band. Overall this is a fun jam album that shows the band continuing where they left off. There will always be those critics that think the band might have played it safe on this album by not making much of a musical change / progress since their debut, but as I have said before in my reviews… if the formula works then don’t change it. Just another reason why Germany is really stepping it up in the realm of Death Metal as of late. F.D.A. Records continues to be the rising star of labels that are hashing out good material, let’s hope they start working on some tours in the USA as I would like to see a few on their roster tour together. For more info: www.facebook.com/wound.deathmetal, www.fda-records.com