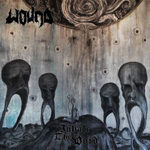 Sometimes I have a really hard time to get into a record, mostly there are parts I really dig, and then there are parts that I don’t get, such albums are really hard to get a grasp on, and tough to write a review on, as the writing tend to tip one of the sides, and don’t tell the whole story. "Inhale The Void" from German Death Metallers WOUND is such album. They sport some nice classic old school Death Metal deeds, and then some a bit too fresh sounding melodic tendencies, that clash a bit with my personal taste, and the base that I imagine myself that they are trying to make. Do I make sense? I hope not, as it would be close to a first, but I’ll do my best from now on! The base lays within old school Euro Death Metal with a good dose of melodic Death Metal intertwined into it. It reminds me of a lighter version of FLESHCRAWL, when they transformed from from their fantasic old school Euro Death Metal masterpiece "Impurity" to the lighter and melodic "Bloodsoul", just without the same weight that said band had back then, and then some added Hardcore breakdowns. There is a schizophrenic feel to this release, the transitions between groove, brutality and melodic pieces aren’t that smooth, and then you have a breakdown as the one in ‘Forever Denial’, where did that come from? And it totally kills the momentum, a shame. "Inhale The Void" does offer some good moments and a hope for the future for the band. Though some fine tuning of the songwriting and more focus on a direction would do the band and music good, as the album becomes quite blurry here and there, and lacks some momentum and real asskicking intensity. www.facebook.com/wound.deathmetal, www.fda-records.com