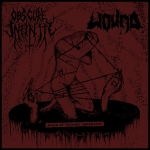 Gee, I always loved split releases… You pay for one record and get two bands, and as far as vinyl split 7”es are concerned, the songs are often exclusive songs or rare versions. In this case, we have a split 7” that should wet the appetite for the upcoming new albums from the German bands WOUND and OBSCURE INFINITY. And it features a quite unusual cover artwork as well. It was done by Rebecca Hirschkonditor, a young and uprising artist from Germany. She also did the fine artwork on WOUND’s first album, and this new, much simpler piece of art also sticks out of the mass of Metal artworks. But let’s concentrate on the music again. Both songs on this vinyl 7” are new and serve the aforementioned intention damn good. For “Souls Of Eternal Damnation”, WOUND contribute their longest song to date. ‘Kingdom Of Deceit’ is a very diversified song, that picks up typical ingredients of Scandinavian Death Metal to form a sound of its own. Breaks, changes of speed and a slow crunching final part in the tradition of ‘Left Hand Path’, spiced with epic church choirs in classical traditions of scaring movies. What else do you want of a fuckin’ cool Death Metal song? The other side of the 7” features a new song from OBSCURE INFINITY, called ‘Perdition Destiny’ that completely convinces me as well. Death Metal with a lot of melodies that nods a little to the Gothenburg school, but never copies that, since it still is enough rooted in the old school. The solo break even sounds deeply like some classic Metal, a very nice surprise. So, it’s two times “thumbs up”, I should say. Find out more here: www.facebook.com/wound.deathmetal, www.facebook.com/obscureinfinitygermany, and the label: www.fda-records.com