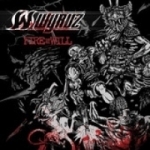 What’s that odd thing with all those Norwegians, why on earth they have constantly been able to produce such an enormous amount of solid sounding Thrash Metal bands within just a couple of years? It must have something to do with their icy mountains, or their isolated location, or the blood of their Viking ancestors – or just about the fact Norway’s whole Metal music culture has always been very favorable for bringing the most talented musicians out to the daylight? Well, it can be whatever really, and the only thing we should really care about is the fact Norwegians have brought us another killer act that we really cannot ignore without giving them a fair chance, to get their stuff introduced to us, right? WYRUZ is a three piece, pretty modern and partly progressive but still relatively brutal sounding Thrash Metal band from Hamar, Norway – and man, they seriously offer a real deal on their 11-track debut album, titled "Fire At Will". The playing is overall very tight; vocalist and guitarist Vegar’s riffs are sharp and murderous; his solos are blazing all around, bassist Per seems to know a delicious enough recipe for getting exactly the right chords out of his 4-stringer – and last but not least drummer Kenneth is being able to create a heavy and firm backbone for his band mates by his skillful drum work. The whole package truly works for them, ferociously breathing fire and brimstones the best it possibly can – well, at least metaphorically speaking, I mean. There’s lotsa certain riffs on this record that SLAYER could have well used on the band’s "Divine Intervention" album; those dark, piercing and malicious riffs that gave a really special vibe and feeling for "Divine Intervention". Just listen to such songs as ‘Dead World’ or ‘Heartless’ to find the connection to that aforementioned SLAYER opus. And now when we are at it – speaking about some certain riffs, I think there’s also a fair amount of similar riffing to be found from a couple of songs on "Fire At Fire" that made IMMORTAL’s "Sons Of Northern Darkness" such a wicked release some years ago (well, some 10 years ago, to be more precise with all of you). Let such numbers off of "Fire At Will" as the title track ‘Fire At Will’ and ‘The General’ be the proof for all this; the presence of Abbath’s unholy ghost sort of haunting behind this WYRUZ’s debut record, just no doubts of that. None of these 11 album tracks sound like fillers; each song is loaded with the guys’ subborn determination to kick this band on the next level success-wise. If they just are able to keep their songwriting standards this high in the future as well, I am sure we’ll hear much more about WYRUZ in the future. In the meantime, sink your teeth freely into "Fire At Will" – and by all means do thank me later by doing so. WYRUZ can be found at: www.facebook.com/wyruzband