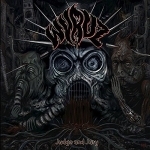 During the 90s, the first revival of Thrash Metal had its main exponents in Scandivavian bands like THE HAUNTED, THE CROWN, DARKANE, CARNAL FORGE, HATESPHERE, DIMENSION ZERO, DEFLESHED and so on. DEW-SCENTED are from Germany but they can be added to this list as well. Now we call this kind of stuff Proto Thrash or Groove Metal and it’s the result of the influence of albums like "Vulgar Display Of Power" from PANTERA or "Burn My Eyes" from MACHINE HEAD. This has happened before bands like MUNICIPAL WASTE, EVILE, BONDED BY BLOOD, VIOLATOR, HAVOK and others brought the 80s Thrash Metal sound back to life, as we know it as the second revival of Thrash. This historic preamble includes the context where WYRUZ formed in 2002, so we have a band with almost fifteen years of experience now. Since then, they composed two demos (in 2003 and 2006) and a full-length, self-released in 2012, before finding a deal with the Australian Battlegod Productions for the release of their second album, "Judge And Jury". From the opener ‘Carved In Stone’ (used also for a promotional video clip) to the concluding ‘Scars’, WYRUZ offer more than fifty minutes of modern Thrash Metal influenced from both the classic sound of SLAYER and TESTAMENT and the Proto Thrash sound that I was talking of before. However, these Norwegians are able to mix also other influences, they can remind sometimes of NEVERMORE, for example in ‘Wither’, and there are flashes of Death / Black Metal here and there. Therefore, this four-piece from Hamar, drew up a manifold songwriting to produce this album, where they can show off their instrumental technique. Of course this album has a very modern production, of the same caliber as bands like MEGADETH or SLAYER in the last ten or fifteen years; it works obviously well and it’s the sound you can expect from a nowadays band, even if I’m not a real fan of this kind of mass-overproduced music, where I don’t know wheter it has been edited or actually played. It’s simply too stardard for my ears, so if you’re a supporter of Norwegian bands like NEKROMANTHEON, AURA NOIR or DEATHHAMMER, I would not suggest "Judge And Jury", otherwise check these guys out at www.facebook.com/wyruzband and visit their label website here www.battlegod-productions.com.

WYRUZ - Fire At Will - by Luxi Lahtinen