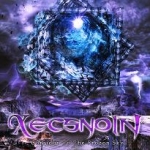 It’s been quite a while since I heard the last sign of life from XECSNOIN, a five piece outfit having its headquarters in the megalopolis of Tokyo. Their last stuff which I was able to have a listen to was their second album "Engraved" from 2009 (the debut was entitled "Xecsplosion" and saw its light of day in 2005) which showed already the excellent quality of this band. After this promising release it became quite silent about this squad and I thought they already disbanded. Luckily I was wrong and this headbanging force is back again and stronger than ever. The hiatus was due to the fact that the line-up carousel rotated quite fast resulting in being bassist Jun being the only original member left within the ranks of XECSNOIN. With their new line-up the band started to write new material which resulted in a three track EP entitled "Bright Darkness" which was released in 2012. These new stuff was just a kind of appetizer of the things to come. Two years later and backed with a new label the horde finally threw their long awaited third output onto market. In my humble opionion I think they delivered a strong comeback. The outfit comes up with a unique brand of melodic Death Metal which has a lethal dose of Thrash Metal to offer as well when it comes to the riffing. What makes the style of the band so different to other groups in the same genre is for sure the merit of female vocalist U. Next to the typical aggressive style of singing, which is not quite different from similiar acts like e.g. ARCH ENEMY, she comes up with that typical Japanese twist which sounds almost gentle or cute. At least that pleasant voice is a great contrast to the usually harsh performance. From the instrumental side there is really nothing to complain. XECSNOIN are tight as Hell and really know how to come up with some excellent thrashing tunes, hard hitting and precise riffage, all refined with top-notch guitar leads and harmonies. They also can’t deny a technical edge as some parts are quite complex. The drumming is powerful, providing strong fills and rhythms and always pushes the whole thing forward. The production of the album is very well done. It is clear, powerful and gives any instrument enough space to develope. The bone hard, slight modern sound fits perfectly to the band’s style. Just have a listen to cool tracks like ‘Take Away My Pain’, ‘Disillusion’, ‘Ragnarok’ (with its great twisted riffs and double bass attacks) or ‘Light My Fire’. Fans of melodic Death / Thrash stuff and J-Metal lovers should check these Nippon Metalheads out. Just visit the band’s website at www.facebook.com/xecsnoin.