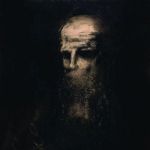 A one man band playing Doomed Black Metal with vocals nearer to a whisper rather than shrieking screams. And to be honest, they do it very good actually. At times sounding a bit hypnotic and repetitive, but in fact that is exactly what the band wanted to create, a state of mind that suddenly transforms with bursts of speed and chaos, with subtle melodies done in the background. Interestingly enough this band that has a strong European sound actually comes for the USA. Yes, there are certain references to the more atmospheric parts of BURZUM and also things like early KATATONIA, but aided with a strong guitar sound and quite decent overall playing and performance. At times the music becomes so dreamy that it can even fit as a soundtrack for a suspense / horror movie, and the very effective use of some acoustic passages only adds more quality to the overall album. Although this is no way a suicidal or depressive Black Metal band, there is an undoubtedly aura of darkness and despair hidden within. Also some references to bands like MY DYING BRIDE or early ANATHEMA can be found here, transformed to the style the band has embraced. It is a very emotional album and one of those that brings things with every listen. Doom Metal fans who like it with a touch of blackness will surely embrace this and make their days more miserable. www.facebook.com/pages/yith/146033415460628, www.hellthrasher.com