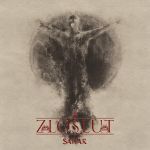 “Sahar” is the third full length by Serbian Black Metallers ZLOSLUT. Founded in 2010 by Agnarion, originally as a one-man band and only from 2016, ZLOSLUT has a full line-up and is growing profoundly with a considerable number and types of releases to spread their own take on spirituality, philosophy and occultism. “Zloslut” is a Serbian word that literally means “feeling forthcoming evil” and should be translated to English approximately as “ominous”. Their past releases will give you some initial essence about what you would possibly experience from this newly unearthed creation, although the Serbians went through quite a transformation before the release of “Sahar” early this year. After adding three other musicians to the line-up, mainman Agnarion took his time to assemble this third full-length, where three and a half years elapsed before “U Transu Sa Nepoznatim Siluetama” from 2015 received a follow-up. And that brings more changes: the first official release with English lyrics, a refined production and a more focused musical vision. This 52-minute release is clearly a statement that ZLOSLUT has certainly evolved, with consistency and cohesiveness, but did not lose their roots of straight forward Black Metal. And in the tracks ‘The Quest’, ‘From Where The Light Springs’, ‘Shadowdwellers Tyranny’, ‘Of A Nameless Faith’, ‘To Break The Circle Of Saṃsāra’ and ‘Become The Beyond’ they not only embody their impressive level of technicality and understanding of musical theory, but also display their excellent compositional ability, which certainly has transforming energy with all of its enchanting atmosphere and spirited transitions. To describe that atmosphere and transitions, it’s rightly inscribed into ‘From Where The Light Springs’ as “The real meaning of enlightenment is to gaze with undimmed eyes on all darkness” (Nikos Kazantzakis). And certainly, it seems like the Serbians sought that meaning by allowing themselves to truly push as far as possible, which makes “Sahar” an intriguing listen for those who seek individual experience, and also to those who seek Black Metal free of trends and other related idiocy. Explore more about the band at www.facebook.com/zloslut and visit their label page at www.morbidchapelrecords.com, https://morbidchapelrecords.bandcamp.com