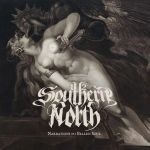 Theremin, Chelys Lyre, Davul, Kaval, Dahare – do not worry, these are not the ingredients for an exotic dish. But part of the instruments that 1/2 SOUTHERN NORTH, a one-woman band from Greece, are using on their debut. And when I write now that also saxophone and violin making an appearance then it should be clear to the last reader that we are dealing with an album that moves quite far from planet Heavy Metal. Ifigeneia Derizioti (aka IDVex), the woman behind 1/2 SOUTHERN NORTH, calls her style Black Noise Of Doom, but do not be fooled. “Narrations Of A Fallen Soul” has nothing to do with Doom Metal. Instead it is an unusual, ghostly spectral journey deep into the heart of darkness. The lyrical concept shimmers along themes of Greek tragedy, literature and occultism. In addition to the unusual instrumentation, it is above all IDVex’s voice that makes this album exceptional. Powerful, covering emotions from eerie and hallucinating to menacing an atmosphere is created that can only describes with words like unearthly or psychedelic. Avant-garde? Yes and no. Yes, if you take standard Heavy Metal as a frame of reference. No, because even if you take the usual avant-garde / experimental bands as a testimonial, 1/2 SOUTHERN NORTH are way beyond that. IDVex and her guest-musicians manage to be pure atmosphere, but at the same time structures can be recognized, each songs follows a certain idea. I think we all know those bands that want to sound atmospheric or modern and in the end it just sounds like a never ending intro. And also those bands that try to integrate traditional instruments into their style and sound like amateur bands from your local the medieval market. 1/2 SOUTHERN NORTH couldn’t be further from that. Enough written, last info refers to the artwork, which was edited by Paschalis Zervas from +Wolframgrafik, Athens. It is the engraving by Moses Haughton (the younger) of the painting “Die Sünde, vom Tod verfolgt” (Sin Pursued by Death) by the painter Johann Heinrich Füssli (1796). So if you are ready for a deep dive to the darkside, book your trip to the netherworld here www.facebook.com/halfsouthernnorth or here www.facebook.com/ladloproductions