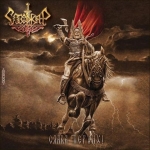 With СТОЖАР, we have a rather long living band from the town in Yaroslavl in Central Russia. Even though they are around since 2005 and released their first (and only) demo in the year of their formation, it took the band until 2013 to release a full length album, “Ни шагу назад”. Not much more than a year later, the follow up “Слава Перуну!” saw the light of day. As you might already have guessed, the four piece sings all their songs in their native Russian language. And their native country also has a massive influence on the music of СТОЖАР (transliterated to STOZHAR). Yes, Russian Folk combined with Metal is the music СТОЖАР has to offer to the world. And even though I sometimes like Folk Metal, “Слава Перуну!” is not a good example of the genre. The opener ‘Смелость и честь’ already starts to get on my nerves very soon, with those keyboards literally shoved down our throats. And the female vocals of Evgenia Vitlugina are a nice contrast to the harsh vocals of band leader Yarosvet on the one hand, but soon start to reach the penetration level of Tarja Turunen. So, it is hard to stand this album for a longer time. Some of the instrumental passages know to please, but, to be honest, this definitely is too little to save this record from being filed under: Folk Metal no one really needs. Those who can’t get enough of bands like FINNTROLL might visit www.twitter.com/stojarofficial or www.stygiancrypt.com