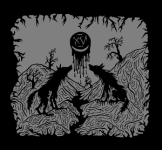 I suppose the title of this compilation might refer to the years this band has been around. Having already released 6 albums, this band from the Ukraine plays a Black Metal style that draws influences form bands like IMMORTAL, MAYHEM, BATHORY and so on, to be delivered in their native language. For this reason they re-recorded material from their discography. On some songs the problem is that the drums sound a bit too low on the mix, but at least the guitar sound in very heavy and present. Some songs have a slight VENOMish / MOTÖRHEADish touch and are some of the most interesting ones. I can also sense some old SODOM touches here and there, which is always welcome. This might get some fans to check out their discography, and it also serves as a way to introduce the band to newer fans. Although there are some things that have been done before, their nod to the old school of Black and Thrash Metal sides sometimes shines and then it is when they do it good. www.facebook.com/skaz666, www.bloodreddistribution.com