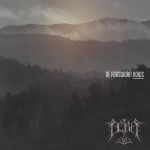 ÆRA is a new two-men project hailing from the USA, which is only active since this year. They already delivered their first tunes in form of the demo release "Of Forsworn Vows" which now gets re-released as a proper EP via Aeternitas Tenebrarum Musicae Fundamentum. Deeply influenced by the Norwegian Black Metal scene of the early and mid 90s, the two guys managed to create some really old school sounding Pagan Black Metal tunes with a raw sound fundament enriched by fine melodies, warm keyboard tunes and epic guitars, varying in speed between harsh and melodic Black Metal. Somewhere between mid SATYRICON and obvious EMPEROR influences, the band managed to create three strong tracks with own trademarks paying homage to a wild time of changes and broken boundaries. The guys have a good sense for writing proper Black Metal and especially ‘Die Wulvsära (Am Ende Der Zeit)’ is a strong track with proper structures and melodies. Surely they deliver nothing what we have not already heared over the years but the 90s vibe they spread still caught me as this is simply something you have or not in your sound. The vocals could be a bit more present and stronger presented but this is just a small weakness in an overall well done demo release. If you are looking for a proper soundtrack to go back in time and enjoy a soundtrack about the Scandinavian landscapes, "Of Forsworn Vows" is definitely worth checking out. More info can be found at the following locations: www.facebook.com/aerapaganofficial, www.atmf.net