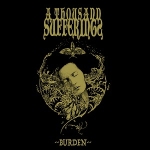 With a relatively long EP, crossing the 30 minutes mark with only 4 tracks, the Belgian Doom Metal quartet present their first studio impressions, which I must say, hasn’t lived up to all my expectations. After the intro track ‘Once In A Blue Moon’, an initially eerie narrative that eventually becomes a bit boring after its second minute, ‘Red Is Redemption (Bloodletting)’ rises mildly in its heavily distorted and down tuned guitars. The song is actually really well arranged, and the vocals are as intense as to share its great disgust and contempt to the listener, but the song itself stretches for far too long in the same crawling-like pace, lacking somehow any attempt to make something more out of its long duration. Subsequently, ‘Black Is Burden (Lamentation)’ follows on the same path of long and bland riffs, however, with the addition of more interesting arrangements and melodies that sustain the now afflicted vocalizations. Carrying some sort of Black Metal influence in this song, especially in its guitar tones, the band still keeps with its doomish atmosphere, and at times deliver a way heavier and uncompromised version of the same despairing Doom ANATHEMA once stood for in their early days, as noticed in the long bridge in the very middle of the song. Nonetheless, the bothersome feeling is still there, and despite the incredibly consistent heaviness of the whole album, it wasn’t necessarily any engaging. Finally, ‘Blue Is…(Remembering Treasures)’ retells the story abovementioned, dragging the listener through another 11 minutes of slow and drab distorted music laments. But overall, A THOUSAND SUFFERINGS seems to be a band that intentionally sets up to create simple structures and delivers them in if not the slowest, at least the heaviest way possible. They come with interesting vocal ideas, but still lack any additional detail that would make them stand out among the crowd of bands trying to achieve the bleakest in terms of atmosphere. All additional information at: www.facebook.com/a.thousand.sufferings, www.satanath.com