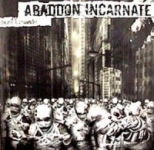 After the debut “The Last Supper” (released in ’99 if I remember correctly) Irish brutalizers ABADDON INCARNATE developed more and more into a Grind band and emphasized influences of BRUTAL TRUTH, NAPALM DEATH on their second full-length “Nadir” (2001). “Dark Crusade” now marks the debut on Spanish label Xtreem Music and like its predecessor was also recorded in Swedish Soundlab studio by Mieszko of NASUM fame. Musically not much has changed in the ABADDON INCARNATE camp, the production is somewhat better, but stylistically the guys kept to their original mix of old and new school Grind and fans of NASUM, REGURGITATE should get along with the Irishmen’s third effort really well. For a Grind album “Dark Crusade” is surprisingly full of variation and driving, highly aggressive parts get mixed with modern, slightly distorted vocals and groovy breaks with this typical rumbling mid-tempo rhythms I particularly enjoy about this kind of music (listen to track 9 ‘Meat’ for a good example). A pretty good album recommended to every fan of contemporary Grindcore that sounds individual and fresh, visit www.abaddonincarnate.com for sound files and www.xtreemmusic.com to gain more info on the label.