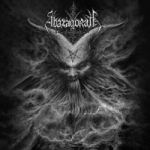 USA’s misanthropic Black Metallers ABAZAGORATH have returned with a self-titled EP. It has been 4 years since they released a split album and a whopping 8 years since they had their last full length, 2004’s "Sacraments Of The Final Atrocity". I can say that the wait was worth it. Even if we only get just 5 tracks that total under 23 minutes, these guys still know how to please a listener. The first track ‘Conjuring’ starts out as an acoustic piece providing a relaxed ambience, and then like a freight train BAM the music really kicks into a mid-slow pace Black Metal jam. An interesting guitar solo appears towards the end provides a glimpse of what we can expect from the rest of the EP. ‘Antigod’ kicks off track 2 and with a fury, the riffs are very catchy and also very melodic. Production wise the EP is very well produced, the instruments are clear and crisp. The vocals are that of a soul that has been damned for centuries and the drums sound like an insane thunderstorm that repeatedly bashes down on the Earth. Things slow down a bit during ‘Lapse’, ABAZAGORATH show’s their creativity during this song with tempo changes and lyrical content. Dark and gloomy the track gives a new spice to the EP and a prime example of how to keep the element of an album "fresh" without drowning out the listener with the same tempo-ed songs. ‘Immortals’ is a page out of MARDUK’s book and provides a blistering charge of grimness yet does not stray off from the grand recipe that has given ABAZAGORATH a name in the underground. The crown jewel of this EP is the final track ‘Storms Of Destruction’. This track is the perfect song to end the EP on a high note. Everything really comes into play in an accomplished form with ferocity. The vocals really standout with a change from screeching to growls, very cool stuff here. ABAZAGORATH have given us a nice appetizer to get us through until the release their next full length. The tracks are good and the production is done in an almost first-class manner that shows why these guys are on the top of the US Black Metal scene. The music is not boring and provides some insight into what ABAZAGORATH have cooking for the future. Let’s see what they can do next, until then keep this disc running on repeat. For more info: www.facebook.com/Abazagorath666