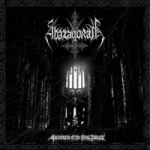 Though a long-time active US Black Metal band, ABAZAGORATH were rather slow in releasing material. The fantastic debut album "Tenebrarum Cadent Exsurgemus" was put out in 1997 on Elegy Records and seven years (!!!) had to pass before the band’s second strike finally was delivered. Ok, some EP releases appeared since 2002, but the slow progress on the second album only increased expectations, which at some level can only be disappointed… Whereas the debut did not really receive the appreciation this unique piece of atmospheric Black Metal deserves, the new album lacks a little the individuality and magic its predecessor had. "Sacraments…" is definitely not a bad album, well-performed, powerfully sounding but due to completely leaving out keys and focussing on storming relentlessly ahead ABAZAGORATH anno 2004 have lost a bit of the mystical and dark atmosphere they had on their debut. Still I like this album though it lacks the originality-bonus the debut had. The band’s feeling for morbid guitar melodies, epic moods and well-varied ingredients of Black, Death and Thrash Metal (‘Buried In Hell’ for example is total Thrash-frenzy!) results in a solid piece of extreme Metal which can hardly be compared to the debut, but remains as good as it is. On two songs there is also some guest vocals done by none less than ex – INCANTATION / ex – DISCIPLES OF MOCKERY – member Craig Pillard, so even Death Metal heads might give ABAZAGORATH’s dark Black / Death a chance… www.abazagorath.net