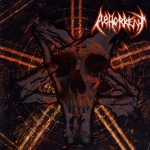 Anyone remember these guys? Since there are five others with the same monicker, it will help to point out these are the Death / Thrashers from Chile. "Heridas" is their 2011 album that is a Thrashing manifest that sounded pretty old school. Not really a remarkable album, but just fast and furious. This compilation by AreaDeath (who of course don’t need any introduction – if so, do your homework! – and is known for their compilers) is a nice overview of the bands three demos. They don’t do this without any reason and history learns this ABHORRENT has emerged form the ashes of ACCURST together with NECRODEAD. To make it even more exclusive this release is completed with 10 live tracks on a second disc. In differing soundquality where sometimes there is hardly anything to make of it. It’s ok as a bonus and for the energy in some tracks. Disc one, is obviously more essential and contains the "Advance Tape (Demo 1992)", "Christianicide (Demo 1992)" and "Start Point (Demo 1996)". The advance tape contains two instrumental tracks, ‘Intro’ and the pounding ‘Christianicide’. Not bad at all and pretty raging. Next is their second demo "Christianicide". This one contains 8 tracks, ‘Irrevocable Cracking’, ‘Unbalance’, ‘Pichi-Caca’, ‘God Of Clay’, ‘Christianicide’ and ‘War Sequels’. The style of the first demo is continued but you’ll hear the performing tighter and more variating, without giving in on aggression. This aggression reminded of old REVENANT, GAMMACIDE, SCHIZO, S.O.D. and sometimes even SADUS (for better comparisons, take a listen yourself because my frame of reference is lacking). ‘Irrevocable Cracking’ starts strong and promising with obstinate guitars. The intensity is awesome! Also, vocals can be found done by Luis Mella. He does a great job here! ‘Pichi-Caca’ is a short Thrash / Grind eruption that transforms into some kind of local party music. ‘Christianicide’ is clearly tighter and this makes it a kick ass demo, with a strong job on the guitar by Richard Ayala. "Start Point" is their third demo, but it is mentioned as a debut album released on cassette only. Who cares, since their performance is even tighter and experimental. ‘Mysteries From The Forgotten Worlds (I, II, III)’ takes almost 15 minutes, for example. With this release they reminded of a thrashy ATROCITY. Eventhough something keeps it from captivating from start to end, at times ABHORRENT delivers pure class. Another case of an criminally underrated band? Hails to AreaDeath once again to catch our attention with this remarkable Thrash history. For more info, go to www.abhorrent.cl, http://adp.areadeath.net.