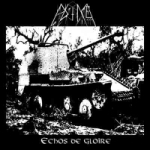 To tell you the truth, with garbage like this to review, I don’t see my future as a contributor of this site as granted. This type of record is precisely the reason I am now moving away from the crappy "extreme" scene of today. Some people should buy themselves a brain and stop to consider that the world waits for them and their "music". "Echos De Gloire" (and believe me, the echoes of glory are faint here!) offers the lamest form of idiotic Black Metal you can found in this universe. It is not enough to put a black and white picture of a Jagdpanther on the cover, together with an unreadable logo, stupid pseudonyms (Huginn and Muninn, that sounds like Hansel and Gretel to me), to come up with an interesting release. I can excuse the use of computer drums, but Hell, do that with class at least! As soon as the spooky intro fades out, this record kicks off with an atrocious and unimaginative track, one (bad) riff repeated as nauseam and accompanied by ludicrous heinous vocals, actually totally ineffective. The French lyrics used here and there on this disc reach the level of bad poetry written by a suicidal teenager, I am unable to find a meaning for all this. Maybe these guys are nostalgic of past eras of European history, don’t dare to explicitly saying so, and see themselves as modern warriors? If this is the case, I can suggest to them a trip to Iraq, when they will find glory and action enough. I am fed up by all these "mean" and "evil" individuals who throw their cardboard hate, aggression and despair at us. Black Metal is on the verge to become an absolute joke, that’s for sure. Like I said the music (and I am generous here) on this disc reaches an abyss of total mediocrity, no idea, no talent, the absolute nothingness. Excuse me, but I feel like I am to throw up while writing this. It is useless to comment on the six tracks on offer here (discounting intro and outro). I listened to a lot of albums in my life, I can tell you, but with this one, enough is enough. Spare your money! No contact needed, at least from my part.