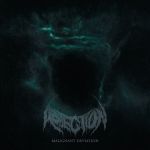 Canada’s four-piece ABJECTION has released their debut EP “Malignant Deviation” via Godz Ov War Productions. These 5 songs and an intro (clocking at approximately 24 minutes) showcase a solid mix of Death and Black Metal. The production is dense and heavy. Upon first listen, I thought of INCANTATION’s “Onward To Golgotha” as a good starting point to describe them. But as they move forward, these songs start developing and adding dynamics, creepy melodies and harmonies that work really well together. Often, they use tremolo riffs and really fast drumming to enhance certain parts. And then here come these melodic lines played over huge chords that open up the oppressive atmosphere. The vocals, courtesy of Cole Benoit, are deep but not as in growls, but more as really low grunts. This vocal texture makes them an integral part of the songs, which is something I really welcomed. Basically the vocals keep the ongoing dynamics. Another highlight is the lead work. It reminded me of the melodic style of NWOSDM, offering a “gasp of air” amid the pummeling instrumentation and the “in your face” vocals. Now, Troy and Sergey’s deliver the goods when it comes down to the riffs and their performance. I would’ve treated the guitar sound in a different way, adding brightness so everything is clearer. I felt I lost some riffs due to the massive low-mid guitar tone they used. And speaking about massive, the bass guitar is simply pummeling. It is a big part of the overall sound. I found it surprising that Josh’s drums are a tad pushed back in the mix, but he hits those skins hard! And he has an amazingly tasteful use of cymbals. And I really liked the natural / organic approach of the drums sound. Overall, ABJECTION has crafted a solid release that proves that, even though they are not bringing anything new to the table, when you put your heart and soul into it, it shows. And this is one hell of a debut. Contact the band at www.facebook.com/abjectiondm and get this great EP from their label: www.facebook.com/godzovwar