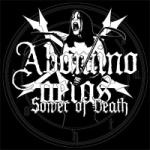 The sky has turned black and it’s so good that after so many years again a Norwegian star is the reason for a further nightside eclipse. Think of times when the term "to own" a record has become much more important than "to feel" it and the words "Black Metal is more than music" are only some minor words fading to infinity there are still bands (even if they became so rarely) which are keeping the spirit alive. ABOMINO AETAS from Stavanger are completely unknown, maybe not only to my person, but their first record via Firestorm (sub label of Godreah Records) will change this status for sure. Imagine a band deeply rooted and minded in the pre hype era of Norwegian Black Metal when bands like MANES, GEHENNA and even DIMMU BORGIR just released their first demo tapes / records. Furthermore imagine a record with the same sound like these records, no mechanical clear one but a warm underground record with edges and finally imagine 11 true Norwegian ("melodic") Black Metal songs with heart and soul and you will understand that these bands are still out there and that with ABOMINO AETAS one wild animal has left the misty Norwegian forest to re-conquer what once been lost. Could advise / write more about this record but everything has been said – great debut from a great band. www.godreah.com, www.abomino-aetas.net.tf