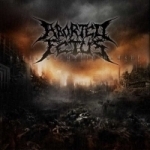 Describing the sound of this quartet from Russia is pretty simple when you take a look at the band shirts ABORTED FETUS’ members are proudly sporting inside their second album’s booklet. DISGORGE and DISAVOWED are the names that immediately caught my eye and especially the Californian cult brutal Death outfit obviously had a strong impact on these guys here. Fortunately, due to being around for over 10 years they got the skills to pay tribute to the legend extraordinarily well! Short sharp violent tunes that are characterised by hard hitting blasts, crushing slams and sick vocals that could have been improved by a bit more variation in terms of pitch (too much wee-wee, too few roaring growls) is what brutal Death gourmets are being served on this bloodsoaked platter. Lyrically, I was quite surprised to see that despite the rather dull band name there is actually some substance to be discovered here and Dr Litvinov’s (whoever that is) writings go beyond the usual rape-fantasies (of course that excludes the rather ridiculously titled ‘Total Sodomization’ and ‘Post Mortal Hymenoplastic (Virginity Restoration)’). Riffing-wise ABORTED FETUS doesn’t sacrifice its undeniable intensity to technical extravaganza but actually incorporates a certain, simple NY-style groove in the slower sections nicely reminding me of INTERNAL BLEEDING, PYREXIA. Regarding production, ABORTED FETUS sounds absolutely perfect – heavy, crisp, powerful, transparent – and easily meets the international standards in this rather crowded genre. Profiting from its concise compositions “Fatal Dogmatic Damage” is a flawless, entertaining brutal Death Metal album and if ABORTED FETUS manages to bring its devastating force across live the band might gather legions of new supporters among circle pit fetishists who should consider “Fatal Dogmatic Damage” a mandatory buy. www.comatosemusic.com