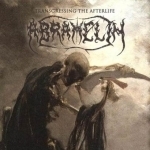 The Australian Death Metallers ABRAMELIN are probably known to most die hard underground lunatics, but the truth is that the band never managed to estabilish their position on the European market. While we mention many US Death Metal acts in one breath, we need to think a few seconds while being asked for Australian bands, so most probably the location factor is one of the reasons why ABRAMELIN never made it. And actually it’s a real pity, as with no doubt their Death Metal could find many fans in Europe back in the day. "Transgressing The Afterlife" is a triple CD compilation, and as the full title says it’s their complete anthology. We will find here all tracks from their 2 full length albums, all tracks from their demo, promo and EP releases, as well as 15 (!) previously unreleased tracks, live cuts, and even rehearsal recordings. It’s quite interesting to listen to all three CDs in a row, as we can easily notice differences in ABRAMELIN’s sound between particular releases. Some tracks are full of an old school sonic fury, and would make members of acts such as NUNSLAUGHTER, CIANIDE or even DECEASED really proud, other tracks could land on some vintage MORTICIAN or NECROPHAGIA record, while some others could be labeled as typical US Death Metal, in the vein of early CANNIBAL CORPSE or OBITUARY. Two things are sure: this is a high quality Death Metal collection, and it’s fuckin brutal and extreme. The only one song that seems to be taken from another planet is the DEAD CAN DANCE cover, but well, they had it on their same titled album in 1995, so we have it now here as well. It’s also worth mentioning that the release has a really cool and solid front cover artwork, it looks like someone learned his lession after the terrible picture we could see on band’s last studio album. The package includes an extensive booklet with many rare photos, and an in-depth interview with ABRAMELIN’s main men Simon Dower (vocals) and Tim Aldridge (guitar). "Transgressing The Afterlife – The Complete Recordings 1988-2002" is a great addition to every serious Death Metal collection. Find out more about this unholy Death Metal squad from Australia at www.facebook.com/pages/abramelin/550713968275457, www.centurymedia.com