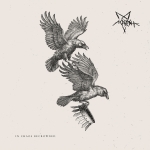 Many many years have passed, where I have loathed most of the new bands and music that has come my way. Not much has been going on in the scenes I’ve been following sparsely, either the same recipes have been rehashed to boredom, boredom just occured or soulless music has been delivered in an overflow of pretty mechanical deliverances and productions. Though lately things have started to happen, here and there, quite shattered all over the place, a little gem from this country and a little gem from that genre. One of the new bands I coincidental have stumbled upon is the Norwegian entity ACÂRASH, a little secret gem, with not much history written in stone yet, though I am sure, this first release of theirs will part the waters and bring them forth as a band, that rocks Metal in a way that isn’t, as such heard before, even though they are using quite a good deal of Norwegian Metal history to bring their own story along. The base is laid upon heavy Doomy Rock’N’Roll with an eerie dark Black Metal feel to it, the music is driven by cold and eerie guitar riffs, delivered with a guitar tone and ambience that makes me think of all from old THORNS, to TULUS and KHOLD to SARKE, with that BLACK SABBATH drive and bottom together with the Black Metal mystery. And speaking of the guitars, damn we are getting a lot of good catchy yet dark riffs thrown our way. The vocals are following, much of the time, in the THORNS spectre as well, cold, grey, eerie, deprived from human passion yet drenched with emotion, darkness my old friend! ACÂRASH is delivering modern darkness drenched in grey molten capes of the olden days, nostalgic without being dusty, modern without losing touch with history, their own without denouncing their inspirations, 8 tracks of dark Doomy Rock and Black Metal tossed into a juicy and intense mixture, that have accompanied me through some dark and hot spring nights so far. You that mingle may, will find your way: www.facebook.com/acarash, www.darkessencerecords.no