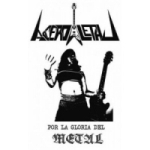 Great songwriters will make their songs sound good irrespective of the instruments they use to record them. We all know how few bands can strut their stuff, especially those ones that claim to play old school Metal. ACERO LETAL is a Chilean band who can do what so many bands can’t: play well. Their sound is recognizable, being a direct imitation of early 80s NWOBHM. Indeed, some of their exquisite solos may easily be forgotten IRON MAIDEN or BLITZKRIEG tunes. Only two songs grace the tape but this band is going to release far more than that if they keep this up. Any label who refuses them a contract is a label asking for an infinitude of regret. www.myspace.com/aceroletal