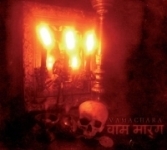 Greece has always been known for its obscure and mystic Black Metal bands for the last 2 decades at least. NECROMANTIA, ROTTING CHRIST, THOU ART LORD and VARATHRON are just a fair handful of examples from some quality Black Metal acts of the country – and this Greek 5-piece legion of all things occult and mystic ACHERONTAS (earlier also existed under the WORSHIP and SLUTTHOF names) continues the country’s quality traditions for producing solid Black Metal that apparently pleases the ears of many. "Vamachara", which is already ACHERONTAS’ 3rd studio full-length in order, draws its influences from the early Norse type of Black Metal basically, i.e. the legendary Norwegian MAYHEM’s kvlt-ish "De Mysteriis Dom Satanas" 1994 album – as well as EMPEROR’s "Wrath Of The Tyrant" demo times from 1992, crossing mildly my mind occasionally. Add also some ancient Greek mysticism and obscurity into the same venomous soup of these Greek torch bearers of grim sounding Black Metal – and you have an idea how ACHERONTAS may want to fill your veins by the thickest black blood possible. The band’s Black Metal presented on "Vamachara", is relatively raw and filthy sounding altogether, still having quite many atmospheric and melodic parts squeezed in that tell to listeners right away that the guys have truly taken their time to reveal this record in a different light but not just as some sort of manifest of Black Metal’s evil oozing grimness only – reminding of some early DARKTHRONE in its pure rawness and furiousness (excluding "Soulside Journey" naturally), which started sort of a hilarious trend among some extreme Metal loving purists what so-called ‘unholier-than-thou’ Black Metal should be really all about, in sense of silly ‘tRoo-ness’. There’s naturally some of that in ACHERONTAS’ new album, too, but gladly it’s not only restricted to some sort of an overhyped idealization of early Norse sound. ‘Ohm Krim Kali’ as a song, could easily belong to the repertoire of the Mesopotamian warriors in MELECHESH for having a twisted blend of Middle Eastern elements in it. Well done guys. On the top of that, comes ‘Drakonian Womb’; the album’s closer tune that almost crosses 11-minute mark in length, and turning out to be quite a dark, epic journey song structure-wise as well. It’s a really ambitiously yet well-composed Black Metal tune, basically revealing its all colors at the richest form, and reaching the kind of privileged momentum to take its well-earned position as the most memorable, stand-out song off the whole record. As wholeness, "Vamachara" really does the trick, and there’s no question about that Black Metal fans will certainly find lots of pleasure and great moments from ACHERONTAS’ 3rd manifest of pure, ancient evilness. www.myspace.com/acherontas, www.agoniarecords.com