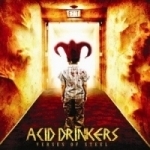 This is not a comeback album, as you may expect from a band like ACID DRINKERS, whose heyday was in the early 90s. No, this is merely the latest installment in a long career full of satisfying albums. From the sound of it, ACID DRINKERS have kept a close eye on the Metal scene and its developments since they debuted in 1990. They make heavy use of the punk D-beat that was so instrumental in the old school Death Metal scene; the heavy down tuned power chords of the short lived Death’n’Roll scene; and, somewhat to their discredit, a slight hint of the ever cringe-worthy Nu-Metal scene. However, for any veteran band to have as much passion, as ACID DRINKERS obviously do, is an achievement. We may not like all the music that they write, but no one can say that they aren’t serious about enjoying their music. www.myspace.com/aciddrinkers, www.acid-drinkers.com, www.regainrecords.com