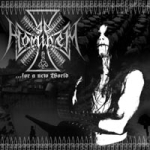 Well, another Norwegian-sounding Black Metal-band from France? Yes, but unlike some oh-so-cult-bands, this is more quality-stuff like NEHEMAH or SVEST rather than the completely overrated MUTIILATION when we compare it to French bands. Despite the vocals – which I don’t like that much as they seem to have much of a computerized effect on them – this is definitely a good album recommended to anyone still seeking for as much necro-Metal as possible. Some parts have this rather rock’n’roll-atmosphere already to be found on some of the later DARKTHRONE-recordings (‘The Dithyramb Of Sadism’), one of the s/m-intros had been used by CARPATHIAN FOREST already, but since the overall sound is good and the intended atmosphere is captured this is probably as well bought as e.g. a new CRAFT- or ARMAGEDDA-album. Same quality here I’d say, probably better although obviously nothing original. I just cannot see the point in mixed language titles (‘Nuclear Black Metal Kampf’), yet this might only be because I am German. www.undercover-records.de