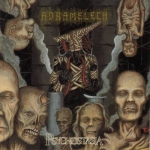 Back in the good old days the Danish national radio had a Metal show each Monday, I think (I might be a little wrong on the day, as it is quite some years ago). Though in one of those shows the host Bjarke Ahlstrand, which you might know as one of the guys behind Mighty Music, played ‘Heroes In Godly Blaze’ from "The Fall" EP, the release just before ADRAMELECH’s first full length album "Psychostasia". I was hooked right away, and said track has been one of my favorite Death Metal tracks during all these years. It is also the opener on this album, and it still kicks some serious ass and holds a lot of quality after all this time. The album was originally released back in 1996 on Repulse Records, and now the predecessor to that label is ready with a remastered re-release of the album (as it was the case with the 2003 release from Blackend). I can imagine there is some demand for the album nowadays, with the focus on the Finnish Death Metal scene we’ve seen the last couple of years, and quite an album to make available again, as it is more than good. ADRAMELECH was part of the tradtion that put Finnish Death Metal on the maps in the olden days, a grinding and dark guitartone and some quite interesting riffs to say the least, intriguing dark songwriting, a haunting atmosphere and a guttural and grim growl from the bottoms of the thousand lakes. The songwriting is stellar and the music is quite catchy, even though it is dark and twisted, the guitarplay is phenomenal, besides the tons of great riffs, we are getting some over the top leads, that really lift the music and atmosphere into another dimension. As a little bonus treat we are getting three live tracks recorded in 1997 in Holland. Quite nice ones, especially as ‘Heroes In Godly Blaze’ is one of the three, together with the (back then) two new tracks ‘Seven’ and ‘The Sleep Of Ishtar’, which made up the "Seven" EP, released in 1998, together with ‘Captured In Eternal Lost’ and a couple of live tracks. A must have album for Death Metal fans and fans of dark atmopsheric music, one of my favorite albums, so go grap yours today and bang that head! More info at: www.myspace.com/adramelechfinland, www.xtreemmusic.com