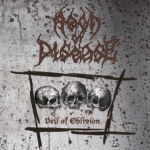 One characteristic of the present Metal scene is bands materializing out of thin air, many outfits popping up with an debut that easily can challenge established bands. And I am not talking of those omnipresent "super groups", because it is no surprise if some musicians, each one with a history of 20, 30 years in extreme Metal, get together the outcome is (mostly) solid. In former times bands released two, three demo tapes, played live and their debuts were excellent because they were the substance of previous activities. The steps of AEON OF DISEASE, hailing from Lower Saxony (Vechta), Germany, are the following: formed in 2015, first demo 2016 (which already earned some acknowledgment), line-up change and in June 2017 "Veil Of Oblivion" was released. So as you see, this review is more than one year too late. But better late than never. Because during the nine tracks (plus Intro) the need to bang your head is inevitable. While the cover and the intro are undefined the opener ‘Mercenaries Of The Ancient Ones’ shows the direction of the album. A massive sonic wall of mid-tempo paced melodic Death Metal. Melodic? Yes, but do not be afraid, it is not too melodic, the BOLT THROWER influences back from the demo days are still at hand. Rather AT THE GATES than SONIC SYNDICATE or suchlike modern bands. The vocals are guttural but at the same time understandable, some shrieks here and there. As mentioned above the sound / mix is close to perfection, all instruments and vocals are powerful, hearable and giving each other enough place to unfold without losing their own ground. If you like AMON AMARTH or that specific style try to get a copy of "Veil Of Oblivion", because the CD is limited to 500 copies. By all means every Death Metal lunatic should at least once check out the small label Neckbreaker Records. You will like it, for sure! More info here: www.facebook.com/aeon-of-disease-113991188934769, www.facebook.com/neckbreakerrecs