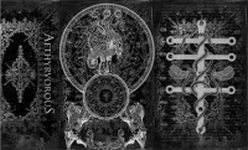 As the end of the year approaches, many magazine outlets, including your friendly Voices From The Darkside, have begun retropspectives – compiling the best and worst of the last year or so. Before the year ends, I want to submit AETHYRVOROUS to the "Best Of" list. AETHYRVOROUS is an Australian band, but their punishing demo may as well have dropped from the sky, for it bears little resemblance to what we’ve slowly grown accustomed to hearing from Australia. This is partly what makes this band so refreshing. They’re not a would-be DESTROYER 666, nor a cheap imitation of SADISTIK EXEKUTION. Rather, AETHYRVOROUS belongs more to itself and a few obtuse bands like INCANTATION, and perhaps even early NILE – for both bands, once upon a merry time, wrote music that significantly diverged from the norm, crafting a smothering chokehold with their music rather than a "hatchet to the head" (sorry, couldn’t resist). They also stand out thanks to their complete immersion into the occult. Surely they are not the first band to creep through such dark corners, but the degree to which they have absorbed the arcane into their music and image is striking. The tape alone looks like a small mural of glyphs and sigils rather than a cover. An impressive tape indeed, one that any collector should feel proud to own. www.aethyrvorous.com