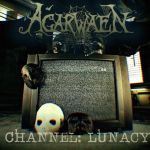 AGARWEN is a modern melodic Metal band. The band call themselves a Horror Metal band and they’re not far from that assessment. The music is an interesting mix of a modern approach of songwriting that instantly stands out. Focussing on the positives, the musicianship is top notch on this album. While the riffs and the general approach towards their sound seem regular, the band mix it up with varying vocals that have a dark undertone. I don’t know if they have two vocalists or have a guest vocalist but some of their songs sure sound like the vocals bump between one approach to another. If you’re curious, have a look at their YouTube channel that has a couple of lyric videos from the album. The band’s sound is an all out assault and they do not switch off even for a second. The track ‘Channel Of Lunacy’ starts off rather differently with the words “Why avoid vaccinations for deadly viruses? ‘Cause governments are adding microchips to inoculations. What will be the future for courtesans? When the kids are selling their asses for likes in social media.” Now that’s a lot of information in four lines. The first two, I don’t know what to make of it and I know the band clearly said that in jest (I truly hope so!) and suddenly we’re at Courtesans and social media likes. So yeah, the lyrics department needs some serious kick in the rear. The musicianship is good, the vocals are varied and the production is adequate. I’ve glanced through their social media to see what the band is up to and it looks like they’ve already written album # 3 and are shopping for a label just now. I hope they mature both sonically and lyrically on that. For more info, please visit www.facebook.com/agarwaenband and https://agarwaen.bandcamp.com