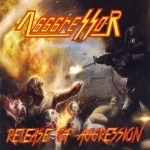 After the 2nd wave of huge Thrash Metal explosion (that happened in the vegre of 2000, and has strongly been going on for some years already), thousands of new Thrash Metal bands have wanted to be a part of this massive cake, ready to be enjoyed with different ingredients that they are able to offer via their own releases. Most call it retro Thrash Metal movement, and because of that not giving much credit or respect for these younger groups – just no matter how good and skilled musicians they might have, which is somewhat ridiculous in my humble opinion. They always tend to say for their defense, "things were done better back in the day…", which also is at least partly true and cannot be denied. AGGGRESSOR (yep, you got that right: written with 3 x Gs) come from Mexico and these 4 young lads play retro-ish, old school Thrash Metal that has a lot of conviction to it execution wise. In fact, AGGGRESSOR do remind me of the heydays underground tape trading times on their 9-track debut album "Release Of Aggression", when there was so much to be discovered – and new interesting yet potential acts to be found nearly on daily basis so to speak. AGGGRESSOR play mostly fast, very riff-orientated and rough Thrash Metal with amazingly high energy levels – and in a way AGGGRESSOR give a reason or two for me for a musical comparison to New York’s long defunct skullcrushers DEMOLITION HAMMER, especially the band’s early demo era. Vocalist Jack Daniel also sounds surprisingly much of Chris Bailey of INFERNÄL MÄJESTY; i.e. evil, wicked and ready send some vicious demons to your neck. These Mexican fellows know how to thrash – and how to thrash convincingly enough to be a bit more precise with all of you. A cover song done for ‘Painkiller’ by JUDAS PRIEST, does also sound pretty kickass in the hands of AGGGRESSOR. They have surely given some close ear to their cover song choice, no doubts. As for the production on "Release Of Aggression", this is just a demo standard production but I suppose it actually is meant to be so on purpose, just to provide more of that old school feel to the album. AGGGRESSOR is a very potential Thrash Metal group in my books from now on, to keep my eyes better on them in the future, absolutely. AGGGRESSOR management: whorship_m@hotmail.com or dexterg.martin@hotmail.com, label: www.alprods.net