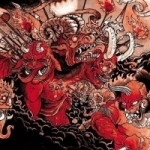 "Bestial Machinery" is a collection of rare material that AGORAPHOBIC NOSEBLEED recorded prior to their Relapse Records debut "Honky Reduction". It consists of contributions from split-records, 7-inches and some previously unreleased stuff. The fact, that 136 tracks (the term "song" wouldn’t really fit those outbursts that often don’t last longer than a few seconds) are gathered on these two discs should already give you a hint of what to expect here: twisted and hysterical US-Grindcore with a drumming machine running berzerk and a mixture of ultra-guttural and shrieky vocals. Insane as they are, AGROPHOBIC NOSEBLEED still don’t manage to stay completely clear of the realm of music, since they also included coverversions of VOIVOD and C.O.C. which really stand out in this maelstrom of noise. Nevertheless, I’ll probably always prefer Swedish acts like NASUM or GADGET when it come to Grindcore, since they in all their furiosity and sheer brutality still manage to keep a certain seriousness to their cause. The Americans in their almost childish attempt to be as sick and extreme as possible too often get lost in total chaos and end up sounding rather ridiculous. Songtitles like ‘Black Ass, White Dick’ or ‘Death Takes A Shit 2 (Assnuke)’ aren’t making it any better. Anyway, still a nice soundtrack if you’re planning to run amok in an overcrowded shoppin-mall in the near future or just would like to impress your comrades in school who always push you around.