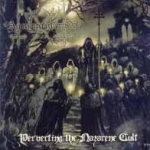 How fitting that to close out this particular chapter of VFTD – the floodgates close with a few last minute dribbles, and each of these trickling clotted piss pools hail from Belgium, the latter is of course… Black Metal! As I sit here and draw my knives from their sheaths for this review, what blasts from my speakers is more fodder for these razors – as these part time ENTHRONED members make no real honest effort to distance themselves from their previous act, that is of course aside from the unfortunate decision of the alphabet vomit that is… AGUYNGUERRAN. In fact the more this album spins, the more I wonder why this record wasn’t released under ENTHRONED’s moniker? Each of these songs (if you can call them that) lumber forward predictably, and the blatant evidence of the caustic aggregate utilized in one band could easily surpass for the other and vice versa. The interchange-ability of these tracks is uncanny! 11 demonic possessions are unearthed for those willing to bend over and wipe the excess of fetid urine n’chunks off my boots, as this pool collects underneath and around my soles, from the gate’s closure. The last song – a tightly played NIFELHEIM cover ‘The Final Slaughter’ – without argument is the best track on this disc and truly present the facts as they are. #1 NIFELHEIM is a better band and #2 hymns like ‘The Final Slaughter’ are the reason NIFELHEIM are signed! Three words… Character, individuality, and marketability. ‘T.F.S.’ has this in spades, and this Hellish evil rite effectively puts all the cards on the table, so to speak. What I don’t get with the rest of "Perverting The Nazarene Cult" is that these ENTHRONED patriots within AGUYNGUERRAN aren’t new to the scene, they are veterans in their genre. You would think these guys would have learned by now that if they want a side project like AGUYNGUERRAN to succeed amongst trivial players like SATAN’S HOST or to survive past the initial name drop of ENTHRONED, that they would have to bring something more driven, more cohesively bombastic, more honourable than the mediocre blast that is in over abundance here and floats like so much bloody shit in the lapping waves of the Absu. Contact: aguynguerran@blackmetal.be or http://users.pandora.be/nguaroth/ or www.shiver-records.com