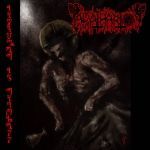 AKATHARTOS
Baptized By Darkness
(Under The Sign Of Garazel Productions)
27:25min

Russia’s one-man Black Metal band AKATHARTOS has released their first set of music in the EP “Baptized By Darkness”, and it’s a fucking mess. Now, before you lose interest, this doesn’t really mean it’s bad. Well, the production is bad. It’s all over the place. Some instruments are louder than others. Hell, it almost sounds like every instrument track was recorded on a different laptop or machine. The EP is raw. But not in a good, old school Black Metal way. It’s raw, as in “what the living fuck?” raw. But again, that’s not completely all bad. The intro ‘Black Mass’ begins with a church bell and whispery voices that leads into ‘Death Embrace Of Lamashtu’, a muddled heap of keyboards, programmed drums, and loud as hell animal growl vocals. If this is a song, I’m a little confused as to where the tune and rhythm are. Track three is ‘Olahm – Ha – Qliphoth (Intro)’, another ambient piece that segues into ‘Enslavement Of Christian Souls’, which gently lingers ominously between atmosphere and more of those fucked up vocals. I have no idea if the lyrics are about Satan or the zoo. There’s more ambience in ‘Golahab The Great Fire (Intro)’, then ‘Eternal Hatred To Son Of Nazareth!’ (okay maybe it’s not about the zoo and more about blasphemy after all). The drum loop doesn’t really go along with the drums or anything else in the track for that matter. It’s like five different songs all playing at once. Our anxiety finally ends with ‘Glory Our Father, Satan! (Outro)’, which sounds like a struggling sea-turtle trying to speak in tongues while the wind blows in its face. But amongst all this craziness, beyond all of the psycho production and mixing, there’s a faint (very faint) light of enjoyment in the chaos. Sometimes Black Metal can be so underproduced that there’s a charm to it, even if for a millisecond. It’s simply so bad it’s not hate-worthy. There’s a part of me that’s actually looking forward to what comes next… in a sado-masochistic sort of way. For more information, check out www.facebook.com/utsogp, httprs://akathartos666.bandcamp.com