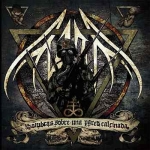 AL AZIF from Madrid in Spain are already active since 1999, but have only released a demo and a five-track EP so far. Finally they have put together a full-length and release this piece of hate on their own. The eight tracks recited in Spanish language consist of a mixture of brutal Death- and Thrash Metal and the 16 years band history can be heard on the recordings, as the tracks sound very professional and elaborated. The fundament of their sound is brutal technical Death Metal in the vein of the well-known bands from Florida like CANNIBAL CORPSE or MALEVOLENT CREATION but with a bigger edge of Thrash Metal like TESTAMENT. The tempo is slower than known from the Florida league, with less breaks and blast beats but this lets the songs flow and is not taking away the speed and groove. The songs are groovy and hard and the rough vocals fit well to the music. The guitars are very technical and remind me of bands like CYNIC from time to time but the music is a lot easier to get into compared to the real technical Death Metal bands. Songs like ‘El Horror’ and ‘Perros De Tindlos’ really work out very well and due to the short length of each track, really come straight to the point. I still miss some real memorable songs but the songs are not bad at all. Fans of underground Death- / Thrash Metal should check the band out via their facebook page www.facebook.com/alazifmetalofficial and also can order the CD there for only 5 euros plus shipping.