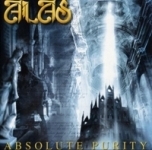 ALAS is Erik Rutan’s new project and has nothing to do with what we were accustomed before by this highly talented musician. Erik Rutan build a strong following throughout the years, thanks to his dedication and hard work. The current MORBID ANGEL tour proves how much Erik has become a leading force in that band, to the point he even eclipses the mighty Trey Azagtoth on stage. In this context, it was logical that Rutan felt a little restrained in the MORBID ANGEL ranks and needed to expand his musical horizon. The HATE ETERNAL debut was clearly a confirmation of this, but with ALAS maybe Erik has gone too far too soon. Paradoxically, “Absolute Purity” is at the same time a perfect and a not so good album. First, I have to stress out that ALAS is by no means Erik Rutan plus three fill-in musicians, but instead the gathering of four equally gifted artists. Together they perform a very mystical music, dominated by the seraphic voice of Martina Astner, known for her work with THERION. That said, I suppose this album could appeal to DEAD CAN DANCE, THE GATHERING and even ENYA fans. But don’t assume that ALAS is about atmospheric music though, because the prominent powerful guitar playing always reminds you from where Erik Rutan is coming from: extreme Death Metal, even if the melody is more present here. Add to this an amazingly tight rhythm section, and in theory you got a winner. But here lies the main flaw of this album: all is too calculated, the quest for perfection is too obvious. The production (done by Erik himself), is stellar but stress the monotony of the whole as all the songs are structured exactly the same and the never varying very mid tempo could induce boredom to you. The album deserves its title because it is absolutely pure, but remember that more than often purity and monotony walks hand in hand, and the passion factor is not perceptible here. A nice try, but not fully convincing. Anyway, I urge you to hear this and judge by yourselves!