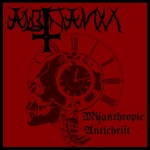 First demo of German Black Metal band ALBTRAUM. Chival, main and only member, gets his ambitious announced by some mysterious personal biograph on his home page: “The motivation to write his own music was born for a simple reason: Other artists music, would in most cases, not fulfill the personal expectations, in case of lyrics, sound and songwriting." I think I can divine, "Misanthropic Antichrist“ won’t fulfill that desire either. Though it seems playing guitar is Chival’s passion for a few years, he happens to play drums and bass as well. It’s a total mess and doesn’t work out at all. Therefore he involves himself in the “black” magic of ignoring rhythms and looping drums, terribly. He is simply not able to replace his lack of technical knowledge with any striking idea. After a weird and needless three minutes intro, somewhere in the middle of the third song ‘Blasphemy’, it feels like guitar and drums are close to turn into two retards on the run. No-one to give up. I am pretty sure there is someone out there as old school as needed to recall my view and probably like that. And being honest for a second I thought, it can’t be that shitty. Maybe it’s incredible weird and for that reason, genius. But it isn’t! If you consider predictable music and blunt cliché lyrics à la: "I only believe in hate, I only believe in evil, I only believe in sin, I only believe in death, blasphemy“, as “true black art”, here you go. Besides that his self selling habit to me is an annoying way of communicating, whatever ideas. This product feels a little to aspiring for someone who probably should spend some more time with his instrument. And I haven’t yet said anything about his singing style. Which totally doesn’t fulfill my personal expectations. www.albtraum-metal.net, http://albtraum-metal.bandcamp.com