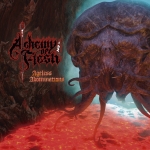 Right from the first second, an atmosphere of MORBID ANGEL envelopes the sound. ALCHEMY OF FLESH lays at the “Altars Of Madness” and kneels to the Florida sound with no compromise. ‘Pain Primordial’, the first track of their debut album “Ageless Abomination” on Redefining Darkness Records is an excellent opener which sticks to the simple basics. 90s Swedish era chainsaw like guitars soaked in the spirit of American Death Metal tempo, uncompromising Florida drumming and the rhythm taking over every inch of your living room. The closest I’ll get to is the blueprint of “Blessed Are The Sick” and that’s pretty positive in my book. The vocals and guitar stand a little higher in the mix but it’s the background drumming that steals the show here. The double bass is a layer lower than the snare and has been mixed to perfection. It’s small things like these that doesn’t make this record stare into your face and give a boop on your nose instead. The band leaves enough space between that filthy slab and yourself. Surprisingly, I haven’t heard any lightning quick solos so far, the band is rather relying on a more modest approach which works beautifully. The sound is thick but not dirty, the vocals take up some space, the drumming fits into the 3D cube to perfection. The penultimate track on side A ‘Slipgates To Annihilation’ is all you need as a sample to get your Netflix infested mind and give this album 39 minutes of your time. Before we came to categorization of this album, we need to ask, how does this slab add to the overall character of the genre? I must say it supplements the spirit of old school Death Metal well however there is seldom any variation than what we hear from the get-go. Also, I do wish there were some insane solos from time to time which would completely push this album to the next level. That’s perhaps the only points I’d like to make, otherwise, this is the perfect companion to both hiking in the Norwegian mountains and for family sing-alongs during trips to IKEA. If at all these guys play in your neighbourhood, just go! It’s at gigs like these you make friends for life. Category: car companion / soundtrack to fighting off arctic wolves. More ALCHEMY OF FLESH information at: www.facebook.com/alchemyofflesh, www.facebook.com/redefiningdarkness