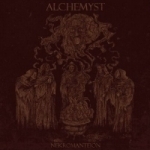 An obscure and occult Black / Death opus of the highest class is what German outfit ALCHEMYST deliver with their first album “Nekromanteion” which marks another proof for the fantastic Teutonic underground scene at the moment. But let’s start with the historical facts: founded in Thuringia back in 2009 and a few notable previous releases like “Blood And Ember” (2010 demo plus 2009 rehearsal) as well as a split EP with MOSAIC in 2011 on Iron Bonehead, ALCHEMYST did not waste much time and judging from the stunning quality of the quartet’s debut exactly knew where they were heading from the start which is not a big surprise considering the fact we have some ANAEL, HELLISH CROSSFIRE, UNGOD members playing here. Produced by Patrick W. Engel at Temple Of Disharmony ALCHEMYST have forged a reverb-drenched yet heavy sound that reminds me of DROWNED also in guitar tone when the deadly, majestically grooving main riffs thunder from the speakers whereas the throatily, almost summoning shouts, clean sung choirs and occasional organ sounds brought NEGATIVE PLANE to my mind as well. While I would criticize the almost complete absence of hooklines, resulting in a more atmosphere than song-oriented record, the eerie and all-consuming dark aura of “Nekromanteion” is so utterly captivating that it remains the only thing I had to get accustomed to and the strong riffs and brilliant lead guitar melodies (just check ‘House Of Aides’ around 2:00min for an ideal example) along with well varied tempo (from very doomy to violently hacking bestial beats) level out this minimal weakness and make sure each tracks sound compact and does not lack memorability. Whereas most songs effortlessly take tons of different twists and turns, a straight song like the driving ‘Okkvltista’ clearly sticks out while a short spinet interlude like ‘A Cave Of Trees’ or the sinister acoustic track ‘Circle Of Elements’ – constructed around nothing more than sparse guitar, chants and screams – add another share of diversity. Closing off with two further highlights like ‘Temple Of Medusa’ which offers a bit of UK Doom / Death riffing, too and the almost 10min long ‘Oracle Of The Dead’, ‘Nekromanteion’ is one of these albums that demands the willingness to spend some time with it to discover all the beautiful shadows hiding in its all-encompassing darkness. Sometimes it reminded me of early SECRETS OF THE MOON revamping the first DARK MILLENNIUM album to throw in some German references: its blend of Death, Doom and Black is as unconventional as it is comprehensible, it is bizarre yet logical, it flows yet never comes across light-footed. It took two, three spins but then “Nekromanteion” got me and I hope it gets your souls as well! One of the strongest debut albums this year! Hear the fabulous ‘Rites Of The Holy Hill’ here. Order the LP or tape version at www.ironbonehead.de; for the CD version go to www.necroshrine-shop.de; hail them at: www.facebook.com/bloodandember!