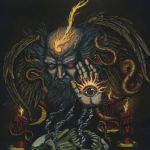 ALEYNMORD from Oregon / USA have burned a path of ferocity for some years, marking themselves as a powerful band in the Black Metal world. Their merciless aggression and the high energy attack of their new record “The Blinding Light” is accentuated by shrieked vocals, a great production and a sense that the band is as tight as they can possibly be. The material is depressive in its mood and panoramic in its sweep, but there’s fury in the hurtling drums, and fear in the vocals, which are barely recognizable as human and sound more like needles scraping against sheet metal from a few blocks away. When it comes to the music it´s an inexplicable something that just makes you continue down the track list, until the short airplay of a svelte 35 minutes grinds to a halt. All of it is carved out of that raw Black Metal style that bands sometimes try to use when depicting grand landscapes. True tremolos follow acoustics with an ambient look and feel and loads of atmospherics. And all of that syncs perfectly with a mixing / mastering that loses nothing. That is what you call a soundscape that is somehow grander than life. And this is not something I have often experienced in my numerous forays into Extreme Metal. As a general rule this is a strong opening salvo for ALEYNMORD. “The Blinding Light” is exactly what it needed to be, deeply emotional, thoughtful and eager to double down on the things that make this band so special in the first place. Buy or die! www.facebook.com/aleynmord, www.aoprecords.de