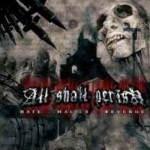 Heavy, brutal, and guttural Death Metal may have been around for a long while, but All Shall Perish will turn heads with their passionate song writing. These 5 dudes, out of Oakland CA, possess an incredible amount of a true talent. They serve 8 truly pummeling and pulverizing Death Metal songs that I would say are a blend from both a more brutal and grinding side of US Death Metal as well as from a more melodic side of Scandinavian Death Metal, without still belonging to either one of them that clearly. Like Cannibal Corpse – meets – At the Gates – meets – Pyrexia – meets – Soilwork kind of thing if that helps you get a better picture of their style? They shove a very welcomed bunch of damn tasteful, chunky riffs, and unexpected rhythm changes everywhere around the disc. They also have rather sharp ears for some cleverly performed, killer hooks. They have the right recipe on the back of the wall of their rehearsal on how to make it all stand out in the finest and most memorable way possible. The end result cannot be anything but thoroughly enjoyable. They sound very well-rehearsed, well-prepared, and ready to conquer the whole Death Metal world on their debut full-length album. There is a lot of diversity between the songs, which is a good thing of course! Listening to the album hardly bores you because the guys’ extraordinary good view of details within their approach on this record. Honestly, I think that All Shall Perish surely are the most potential, may I even use the word "newcomers" in the Death Metal genre (All Shall Perish formed in 2001 if some of you care for some tiny details…) that I have had a pleasure to witness during this on-going summer 2004. I have never been a fan of Death Metal of the most brutal and guttural kind, and All Shall Perish represents probably that edge of brutality that I’m somehow still able to stand. Thanks to them for not taking their music for granted at all and for taking the time to make each song on this release stand out. All Shall Perish shouldn’t be ignored by any true Death Metal fan, not even by accident. If the future of Death Metal will be in the hands of these guys, then I’m happy, fuck yeah! www.allshallperish.com.