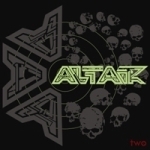 I am assuming this is some sort of demo CD as the information sheet wasn’t the most insightful, in fact it kept redirecting me to their website, of that once there, there was no confirmation of my inquiry one way or the other! So what I will tell you is that ALTAIR hail from Sweden, Stockholm respectively and have received a number of solid reviews online for this CD entitled "Two". Truthfully I don’t hear what the other reviewers have written thus far about ALTAIR in the bulk of these criticisms. With the slight exceptions of a couple riffs on track #2, an instrumental called ‘Pyroclastic Flow’ and the chorus of track #4 ‘Preemptive Strike’. I just don’t agree with what all has been praised and levied upon this act. As I have read this band is some sort of unblessed creation of SODOM, KREATOR, SADUS and other classic ’80s dirty Thrash, and then I have also read this band is a mix of MORBID ANGEL, GOREFEST, SADUS, and KREATOR. Neither of these descriptions are wholly accurate. Like the saying goes, there is no accounting for taste, and so as to not wage a battle where there really is none, the definite that I will give you about this band are that ALTAIR is technically speaking young. Perhaps too young to actually be recording material at this point in their career and soliciting it out into the world. I hear too many tired riffs, too many old / tired ideas that sit amongst material that without a doubt are indeed better suited for them, material that is better written and executed yet sits idly by, wasted, as theses riffs are hurriedly glommed over and are not feverishly exploited to their capacity. I also hear way too many direct influences in their overall writing, that makes me wonder if these four zombies are all in conscious agreement before they sit down to write a song who they are gonna try to sound like in the next song or if this matter of fact is just a mere bad habit from crawling that they’ll eventually quit once they learn to walk? Contact: altairswe@gmail.com or www.altair.nu