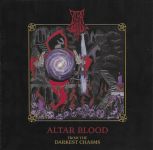 The North Carolina based three piece ALTAR BLOOD is already around for quite a while now. And they really aren’t a very release happy band yet as they only released a demo and an EP in the eight years of their existence. Thus their first full length album “From The Darkest Chasms” is only the third offering from ALTAR BLOOD. Originally, this album was first available in 2019 already in a digital format. Now, two years later, “From The Darkest Chasms” is also here as physical copies on tape and CD, with Swedish Bestial Invasion Records responsible for the latter. And everybody into brutal Death Metal will be able to get their copy of this album. Because that is what ALTAR BLOOD mainly stands for. “From The Darkest Chasms” offers 48 minutes of dense and downtuned Death Metal with deep growls, speed excesses and some well tempered breaks. If this sounds a little unspectacular, I have to say that this album really is, at least to my ears. Most of the time the songs rush past me without leaving too much impact, just as if I heard it all before. There’s just two songs that really caught my attention here as they come along with some strikingly different ideas. First, we have ‘Infernal Heresy Ritual’ that pays a nice tribute to SLAYER with that high pitched scream and fitting guitar solos. Also ‘Scattered Putrification’ with some Hardcore styled shouts gets out of the line a little bit. Yet I can’t say that “From The Darkest Chasms” is not recommendable for fiends of the extreme stuff. It’s just that ALTAR BLOOD are not exactly my first choice if it comes to brutal Death Metal. A matter of taste, you know? Find out more at www.facebook.com/altarblood or www.bestialinvasionrecords.com