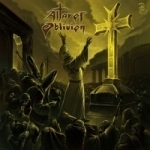 This 5-piece Heavy / Doom Metal act ALTAR OF OBLIVION from Aalborg, Denmark, has been causing quite a fuss around them, by their genuine crossbreed of both traditional Heavy and Doom Metal. Not only have they been compared to such known acts as CANDLEMASS, MEMORY GARDEN, SOLITUDE AETURNUS and a couple of others as well but also MERCYFUL FATE’s name has been popping up on a few occasions due to the band’s vocalist Mik Mentor having both nasal / teeny-weeny falsetto type of vocal approach, which definitely brings in some theatrical drama for the band’s simple and straight forward Heavy / Doom Metal manifest. However, it’s really all this simplicity and straight forwardness that are the ultimate keys to make ALTAR OF OBLIVION to sound so captivating and quite mind-blowing even, as they do on their 2nd full-length studio album, "Grand Gesture Of Defiance". All these 6 songs that are featured on this record, are loaded with some great, emotionally moving moments that make their style quite a serious ear-candy for the hard-boiled community of traditional Doom Metal fans – as mentioned earlier, this style being spiced with slight overtones of pure, old school Heavy Metal. Dunno why some bands seem to have ‘it’, while some others simply fail and struggle badly every time with their hard attempts to make an indelible impression on people. This Danish act ALTAR OF OBLIVION truly has ‘it’ (make it with capital letters if you want to); that one special yet very important and vital thing going on within their sound, which undoubtedly is meant to penetrate through most of our skins. "Grand Gesture Of Oblivion" is the kind of record that simply cannot be ignored with a shrug of the shoulders. Just try it – only to notice yourself what this record is about to do for your mind. More about ALTAR OF OBLIVION at: www.myspace.com/altarofoblivion, label: www.shadowkingdomrecords.com