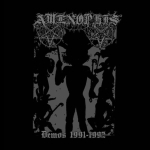 AMENOPHIS from Sweden were active from 1988 to 1993 and, besides two demos and a few live shows, the band did not leave any further imprint on the Swedish Death Metal scene. By the way, a newcomer outfit called MARDUK played their first live show as supporting act for AMENOPHIS. Since both bands lived in the same city, namely Norrköping, the similarities to "Dark Endless", the debut album by MARDUK, are not an unexpected discovery. The two demo tapes, entitled "Amenophis" (1991) and "The Twelfth Hour" (1992) featured four songs on each recording, the track ‘The Church Of Abaddon’ makes an appearance on both releases. Having the huge amount of excellent and legendary albums (and demos) in mind that was spawned around 1991 / 92 not only in Sweden but worldwide, I must say the seven tracks are sort of ordinary. Not really bad, there are even an acoustic guitar part and some female spoken words, but the music can at no time compete with other Death Metal bands. So I guess the split-up in 1993 was no surprise. Only die hard Swedish Death Metal maniacs wanting to collect all and everything may serve as potential target audience. www.ihate.se