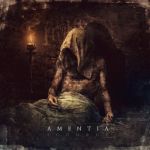 Third album from this band from Belarus. AMENTIA plays a kind of technical brutal Death Metal with undecipherable vocals and unorthodox rhythm patterns. The fact that they have already a few albums under their belt means that at least they are hard working with perseverance and that there are more than a few people that actually enjoy their sound. It also means they have developed a style of their own, and they are very competent musicians. The recording is very good, everything sounds in a right balance and it does not sound overproduced, something that harms many records today. And even if I am not a fan of the brutal Death Metal style (or slamming Death Metal as some call it) I find AMENTIA to be quite good at what they are doing. I think that it is their technical approach which is done with so much quality that makes them to be above similar bands. I can think of OBSCURA, DECREPIT BIRTH and some early CRYPTOPSY mixed with a good dose of SUFFOCATION and some bits reminded me of PESTILENCE “Spheres”. Yet, it is also an album not easy to get into. If you like straight forward brutal Death Metal, then it is not here. This is a challenge for the listener, and the band is wise enough to keep it coherent even with the weird song arrangements. The weakest point of the band is the vocals. Yes, I know that brutal Death Metal needs something low and deep, but then again some are able to do it the right way while doing a proper pronunciation (think of Frank Mullen) whereas when it just sounds brutal for the sake of it, it can dangerously become a parody of itself. For a band with the aura they evoke, with some bits of variety in the vocals and a bit cleaner approach, it will surely make this effort to be more enjoyable than what it already is. www.facebook.com/amentiabelarus, www.satanath.com