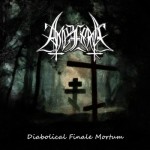 The Russian Black Metal scene is quite large, though it would be strange if not, considering the size of the country. Though there aren’t that many bands that are making a hell of a lot of noise, can you mention ten Russian Black Metal bands on top of your head? I guessed not, I can’t, I know I should as I have reviewed more than ten bands from there, during the last 20 years, though not much sticks to my mind, I’m affraid. I’m not sure that АМЕЗАРАК will be a band that I’m not going remember for long, this new album "Diabolical Finale Mortum" is the one man army’s fifth full length album since 2012, and since I haven’t given the back catalogue a spin, I can’t say how the band has evolved during the years, though I need to give the albums a listen, since the music here, isn’t uninteresting at all. The music has its offset in Scandinavian Black Metal, the melodic side of it, and it is actually done quite well. The songs are well-crafted, and quite catchy. There is some good guitar riffing and some good guitar melodies, once in a while a little keyboard is painting it all darker and somber, the vocals are well done and as such, we are getting good songs. It has all been done before in different forms, though that doesn’t make this album bad, it is actually quite nice to have a fresh take on what happened in Sweden and Norway mid nineties to the mid 2000s, as most of the inspiration apparently is found there. I miss those olden days of fresh blazingly cold melodic Black Metal with a healthy dose of Death Metal to it or the other way around, that Norway and especially Sweden spewed forth some good 20 years ago. АМЕЗАРАК brings back a bit of what we had back then, and some of the same feel and atmosphere, and that is what lifts this album and makes it quite enjoyable, especially for nostalgic reasons, for my sake at least. It might not be an album that I remember in five years, though the next few months, I’ll go back to it once in a while, that’s for sure. Enter the brimstone gate: http://amezarak.ru, http://satanath.com/sodp